This summer of 2021, we offer you a powerful car journey in the French Alps. Driving a McLaren is always a rare and privileged moment, even for automotive journalists like us. Alongside two McLaren 720S Coupés and Spiders, a McLaren GT was waiting for us for a great triple test!

Those who read us regularly will remember our previous McLaren 720S Spider and GT tests. Our “playground” this time around consists of winding roads that are more difficult to navigate compared to Yvelines’ roads, but more interesting for testing super sports cars and GTs from all over the Channel. In addition, the rain fell mercilessly on us, and our first test, a coupe in a “track” configuration, passing through the MSO (McLaren Special Operations) department, is the gorgeous body of the 720S. 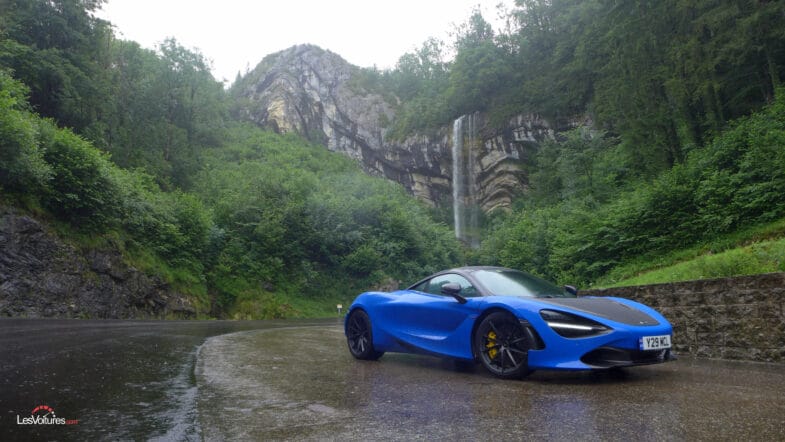 Equipped with multiple carbon fiber elements, this 720S Performance is well placed in the bucket seat, so we’re wary of the first climbs to the Alpine peaks over the Jura, an impressive fog rising before us! On a completely wet road, the 720S revealed great motor skills and above all steering feel. Having 720 horsepower (at 7,500 rpm) and 770 Nm of torque (5,500 rpm) in such driving conditions is not something that can be easily managed. Still, it gave us great pleasure in the “Sport” mode, which is part of the Woking manufacturer’s “Supercars” series. Why ? Because, in the controls of this exceptional machine, we feel the slightest movement of the chassis, every acceleration causing an adrenaline rush to our neurons with extremely sensitive feedback from the steering wheel and brakes. 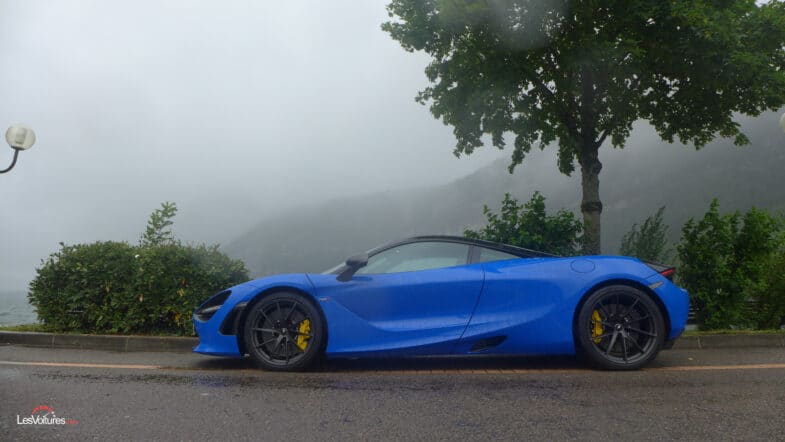 So we have fun sliding the rear axle of the 720S, the “Proactive Chassis Control II” technology works wonders by managing the slipping and sometimes untimely jolts caused by the very uneven road surface! The most interesting thing is that the 720S gives the driver enough time to recover the car before triggering various aids such as the ESP system. This “automotive pleasure” takes almost a second and no more. However, as you can see, feeling it is a moment of ecstasy. Let’s go back briefly to “Proactive Chassis Control II”, explaining how it works: this device integrates sensors and an accelerometer for each wheel hub; This analyzes the handling in milliseconds to play with the shock in real time shock absorber settings to stick the super sports car to the road. 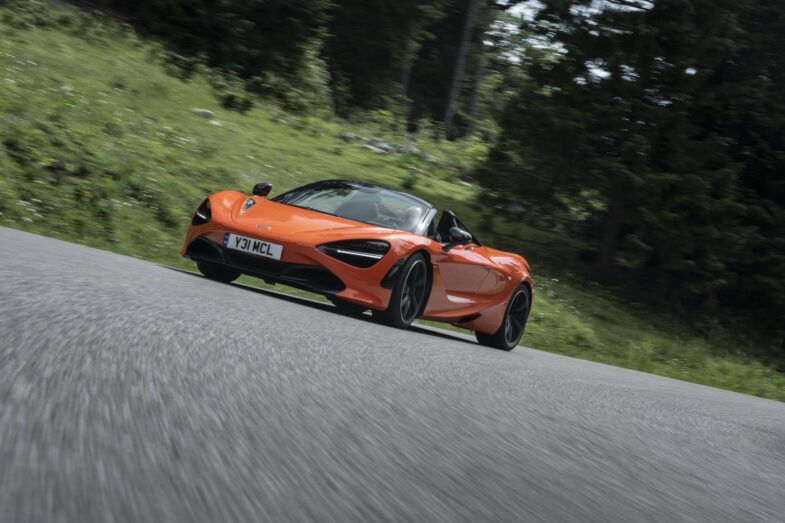 Fortunately, the sun came out the next morning. On this second day of our testing, we got behind the wheel of a gorgeous 720S Spider in historic McLaren colour! On dry asphalt you really get the measure of the rage of the 4.0 l biturbo V8, gear changes are fast and smooth worthy of a racing prototype thanks to the sequential dual-clutch transmission ( 7 reports). 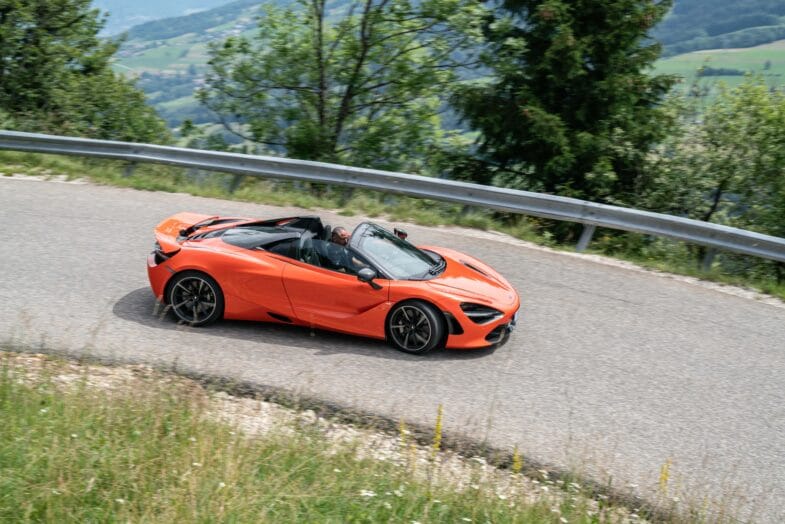 We then dare to enter the “Track” mode. From a radical sports car in the “sport” mode, the 720S Spider becomes a true racing car approved for driving on open roads, as the difference between the two modes is significant. Knowing that the demonic voice of the V8 resonates more and more in our brains, it’s hard to find the right words to describe our feelings to you, the 720S is the supercar of all superpowers. 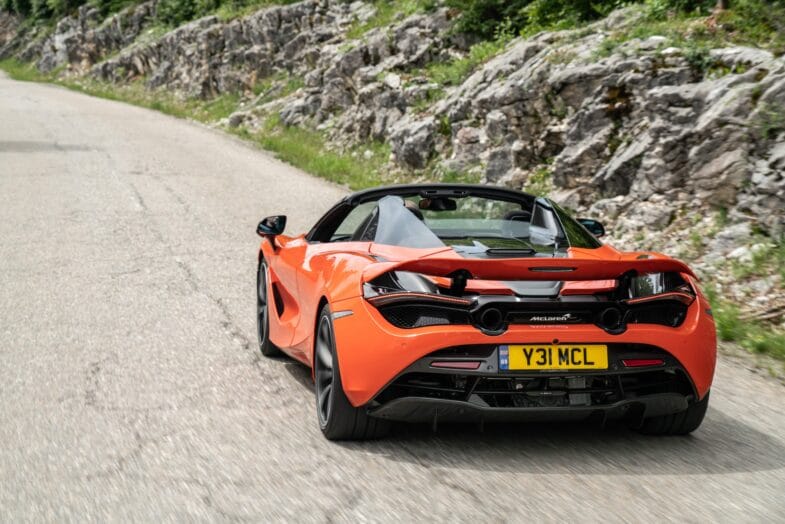 Depress the right pedal hard when approaching bends. You can’t help but look in the rear view mirrors to watch the rear wing of the “runway” turn. Note that the 720S is actually equipped with active aerodynamics. In numbers, this gives a 0 to 100 km/h throw in 2.9 seconds and a top speed of 341 km/h! 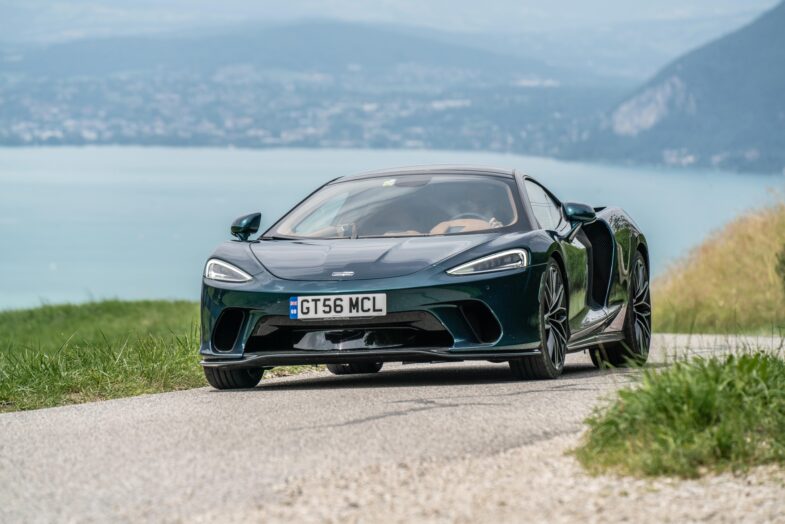 Let’s get back to calm, or almost, by switching to the McLaren GT, which has been a true style achievement for us. Its slim and flowing silhouette also hides the important work that has been done to optimize airflow therapy. As for the “Snake color” color of our test version, it’s like an elegant “So British” render and has a slightly provocative effect against the Aston Martin! 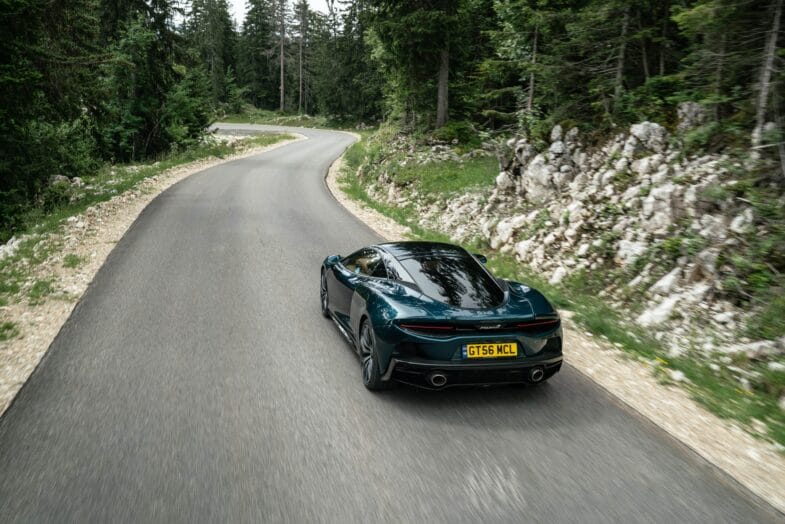 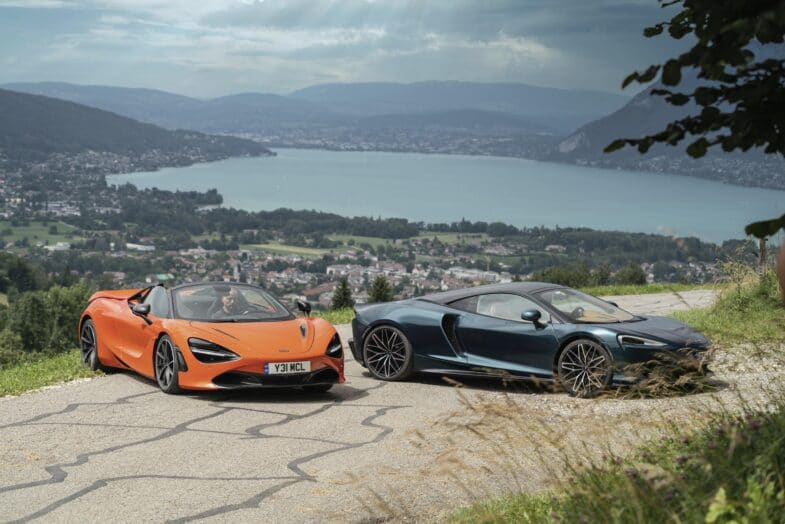 Compared to the 720S, the GT’s chassis and structure have been enhanced to offer optimum comfort. That’s why the engine supports are less rigid and the active suspension is calibrated to more smoothly detect the slightest imperfections on the road. It takes only 2 milliseconds for the high-tech system to act on the hydraulic shock absorbers. Note, however, that the McLaren GT has “Proactive Damping Control suspension” instead of the even more advanced “Proactive Chassis Control II”. 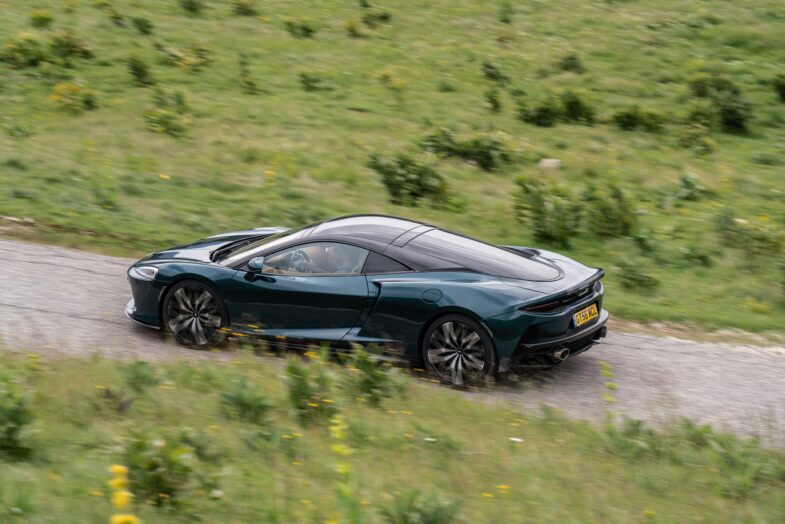 Know that the McLaren GT is of course a comfortable car, but it is still a “real McLaren”. In “Sport” mode, it becomes ultra sensitive while providing fascinating super sporty pleasure. If there’s one phrase we hate to use to describe a car’s character or features, it’s “Dr Jekyll and Mr Hyde.” However, it is indeed most apt to describe the most versatile McLaren. 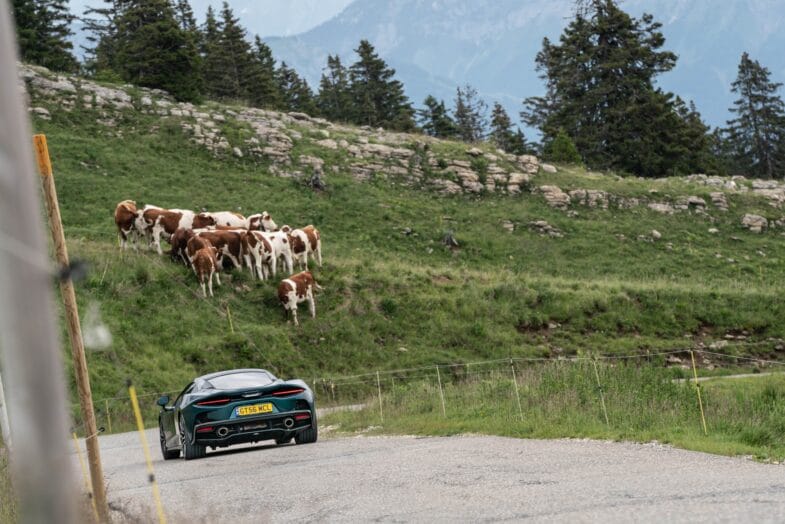 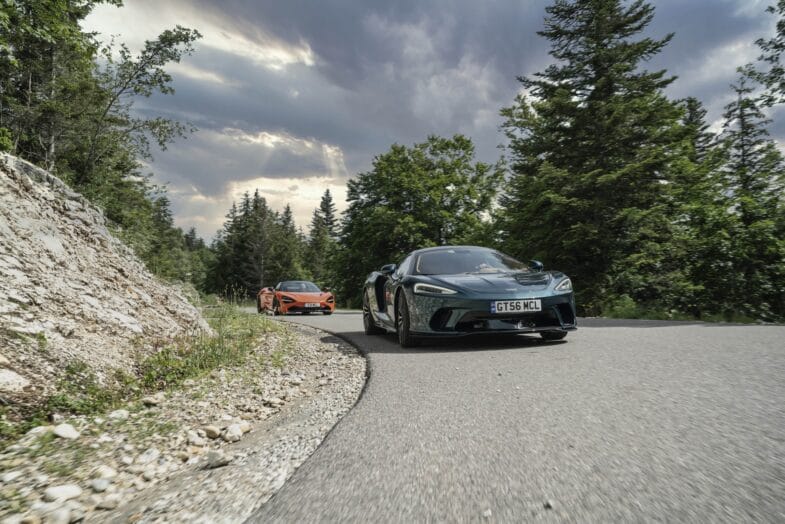 It is important to remember that McLaren Automotive is a young manufacturer. Everyone knows the fantastic McLaren F1, an incredible 1995 example will be up for auction in a few days at Pebble Beach (photo below). 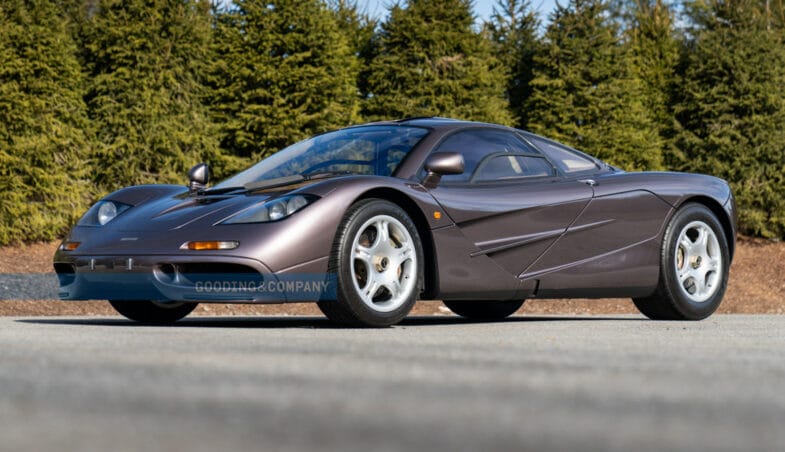 However, the first mass-produced McLaren came out in 2011 with the McLaren MP4-12C (photo below), and the 12C was renamed “just short” a year later. 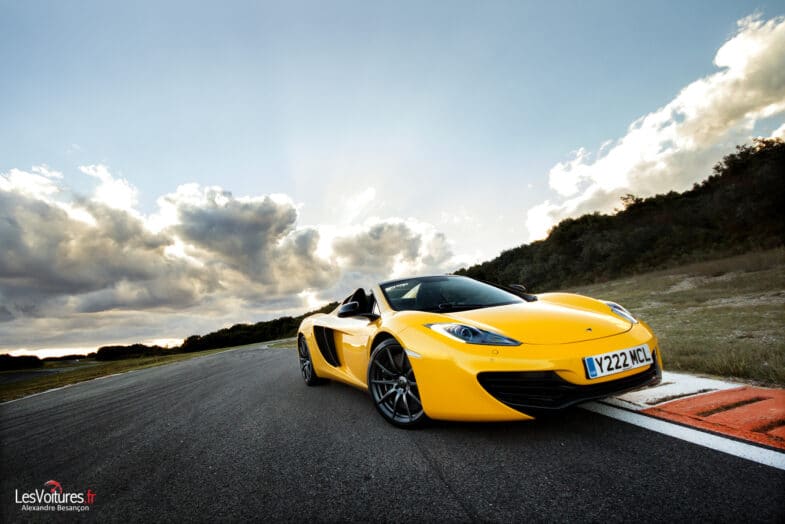 In two decades McLaren has redefined the niche market represented by super sports cars and GTs, the British brand does not intend to stop there. An outstanding McLaren 765LT Spider has just been presented. A few weeks ago, the McLaren Artura debuted as the first McLaren plug-in hybrid model. More photos of the McLaren 720S and GT in the Alps can be found below at the end of this article. 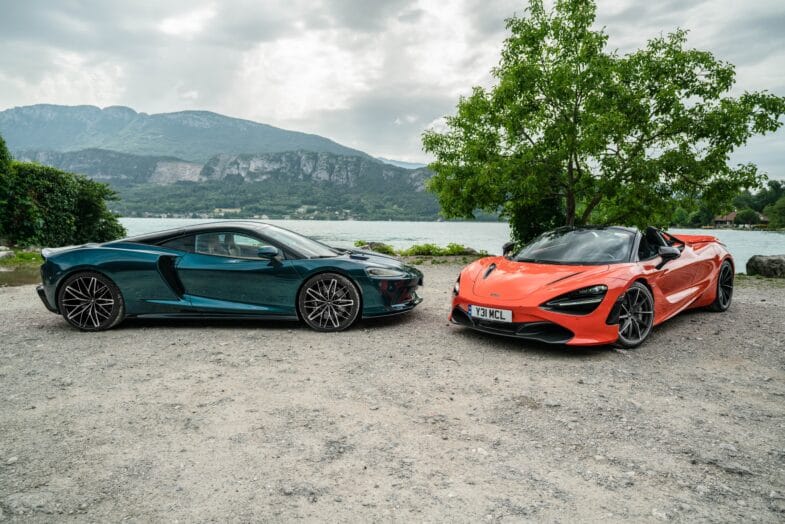 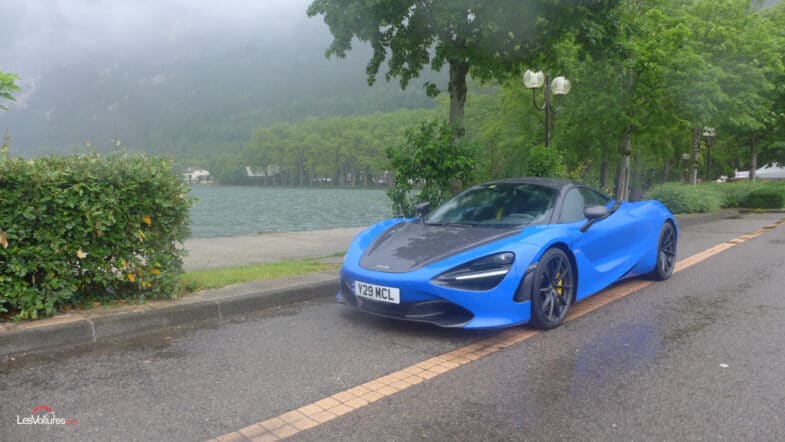 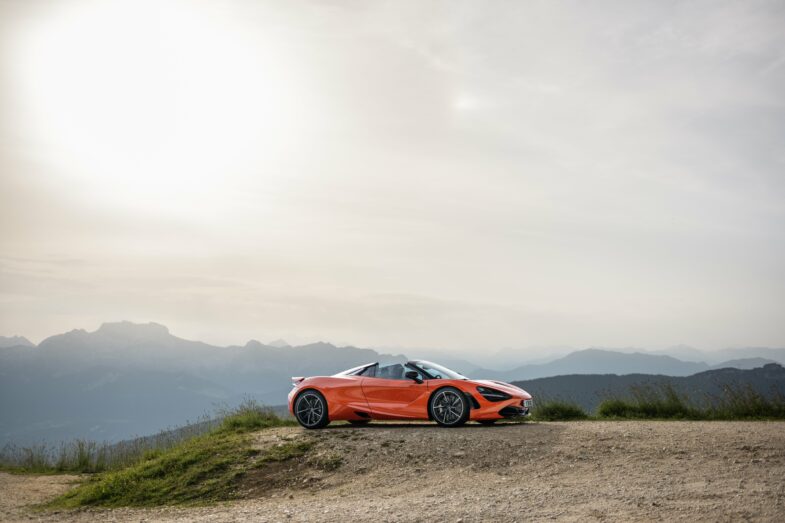 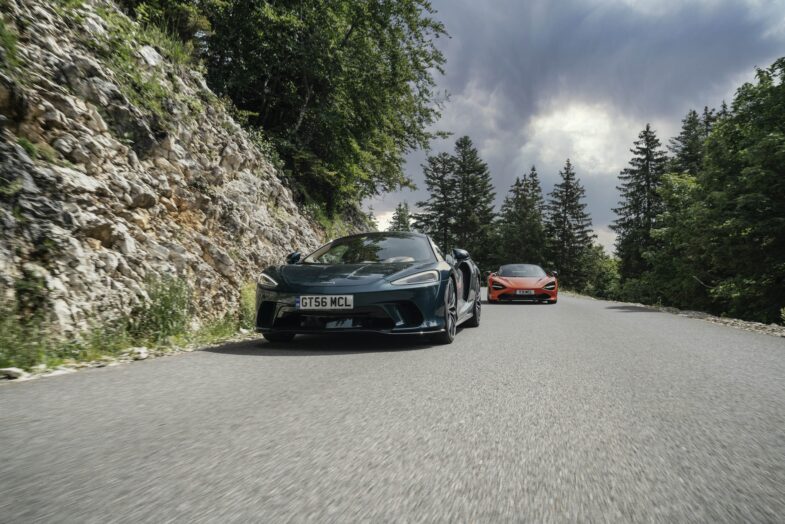 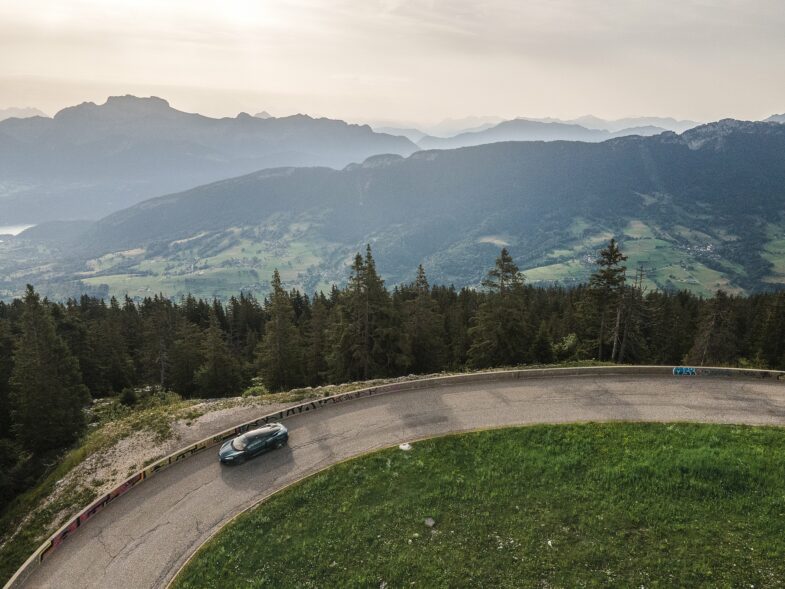 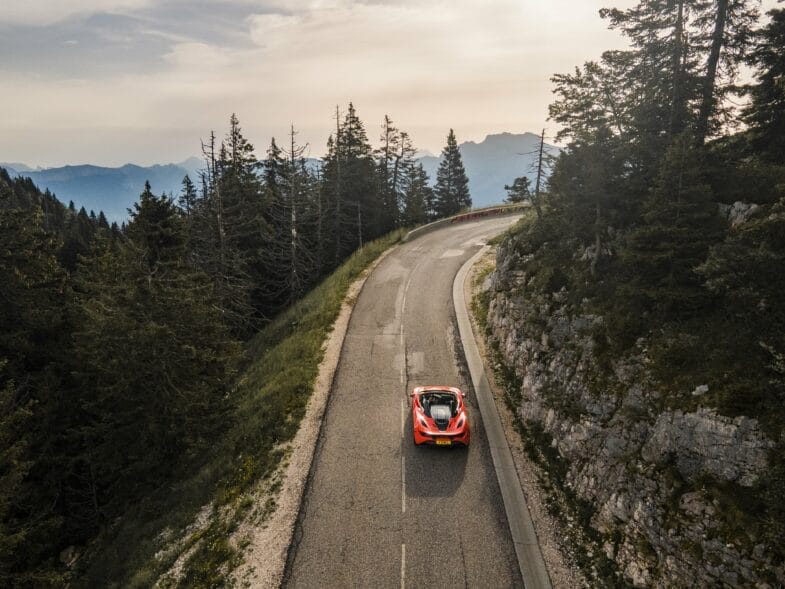 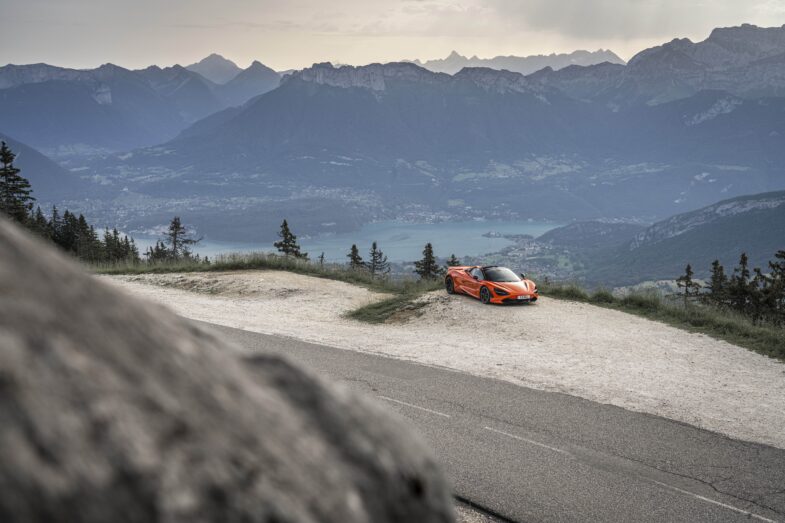 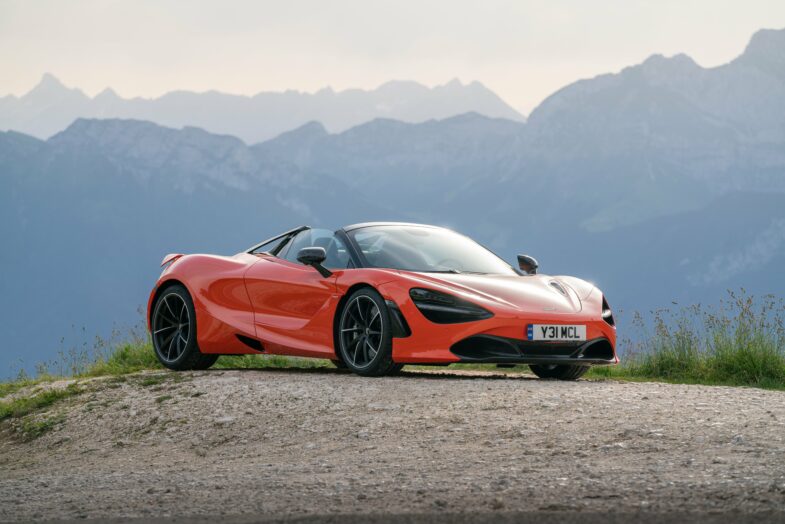 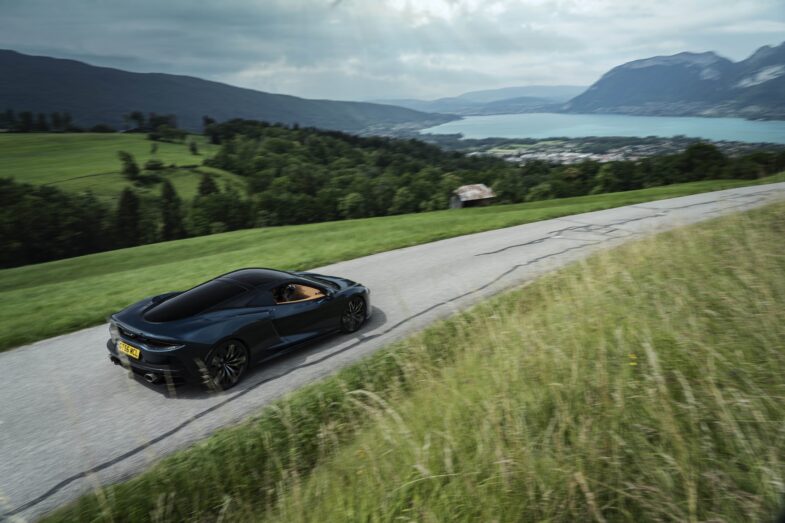 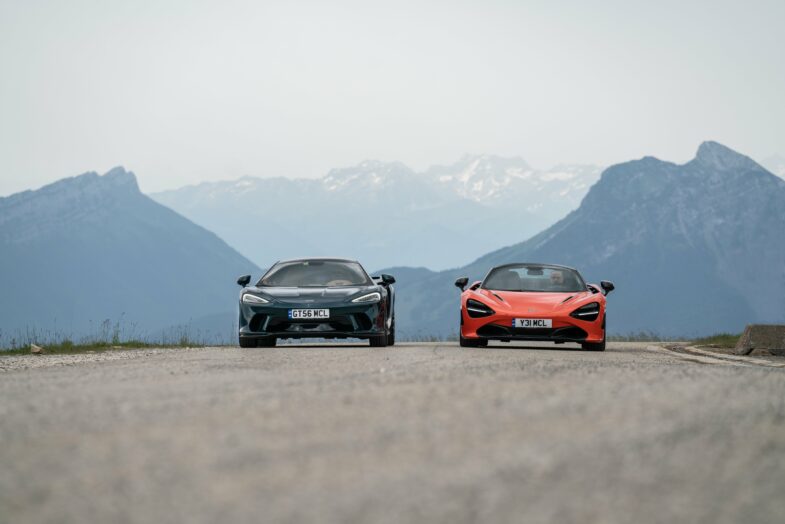 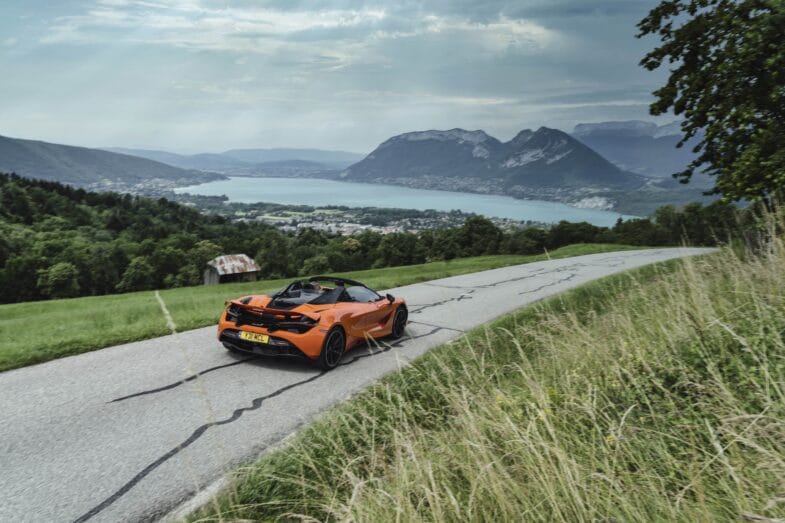