Scuderia Ferrari and McLaren both experienced a very different French Grand Prix at Le Castellet, with both McLaren drivers finishing in the top six.

Both teams are vying for third place in the constructors’ championship and as such both have made aerodynamic improvements on the SF21 and McL35M.

The MCL35M had suffered enough in Baku and failed to show the potential of the first races. Ferrari, on the other hand, managed to improve the characteristics of the SF21 in Baku and Monaco, especially on tracks that were slower than Paul Ricard in qualifying.

In France, Mclaren found itself on a “friendly” track with its SF21, in stark contrast to Ferrari. The Le Castellet track requires grip produced by aerodynamics, not mechanics, where the energy released in the tires is very high and thermal degradation of the tire structure is evident. Rain before the race started on Sunday morning also turned the track “green”, making it even more difficult to check the SF21 for understeer.

In France, aerodynamic updates have arrived for both teams, especially for Mclaren, which offers a major development package on the MCL35M.

The first aerodynamic changes for the British team were seen in the rear area, where the rear wing endplate was revised. 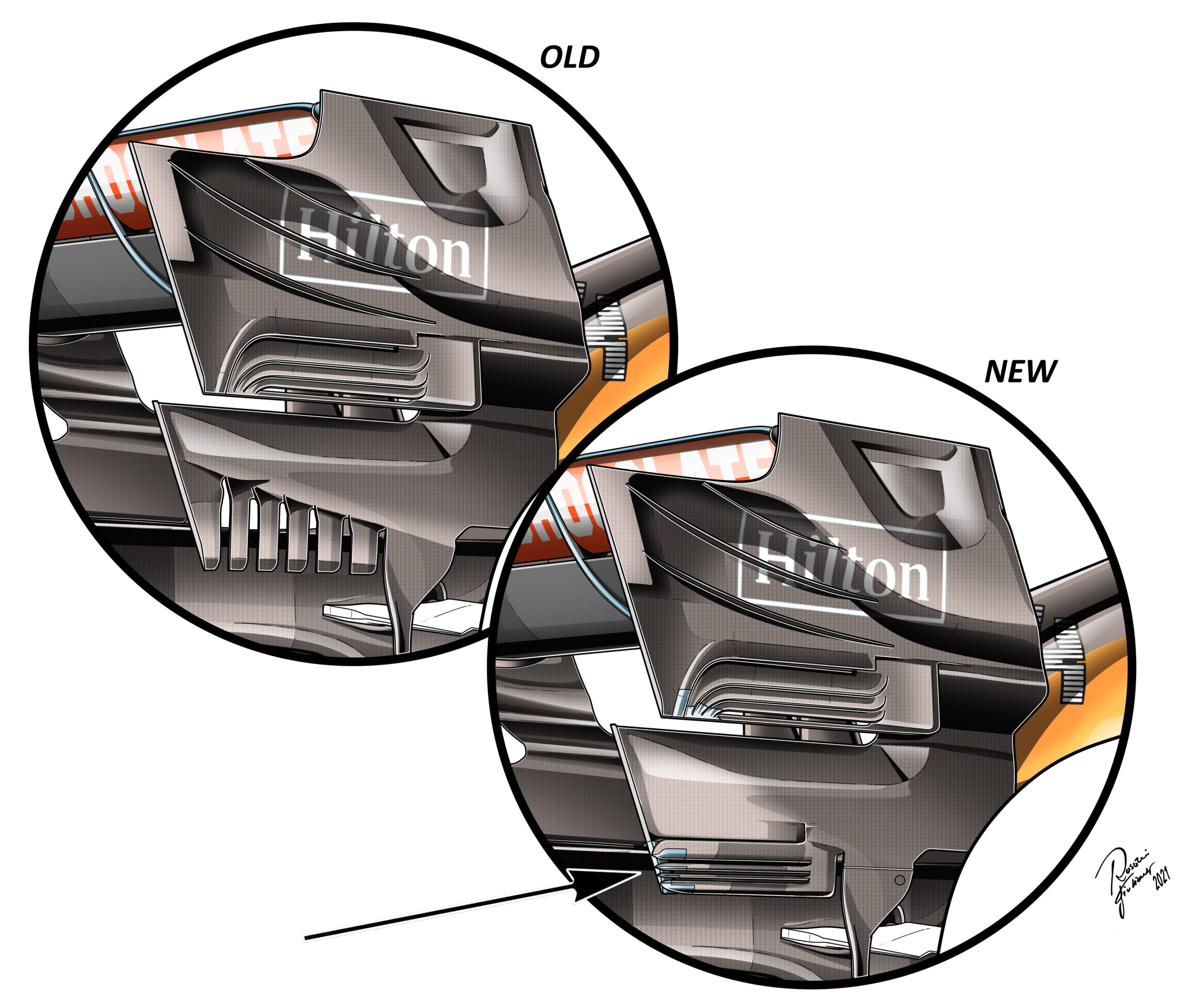 The lower part of the new bay no longer has vertical eaves to handle the turbulence caused by the rolling of the rear tire. In the new feature, horizontal cutouts have been applied, which are useful for directing air entrainment to the rearmost part.

What surprised the most over the weekend was Mclaren’s lack of fear of the heat and the use of a new hood at Le Castellet all weekend, which was more closed than seen in Baku. The Mercedes power unit allows for more aggressive selections to be used without facing overheating issues, but a small alarm sounded on Friday when Andreas Seidl’s team broke the curfew to replace a sensor in the transmission area.

At the rear, Mclaren worked hard to find the best aerodynamic setup, with a larger rear wing than in Baku it was maintained throughout the sessions, although many other teams opted to use less support. 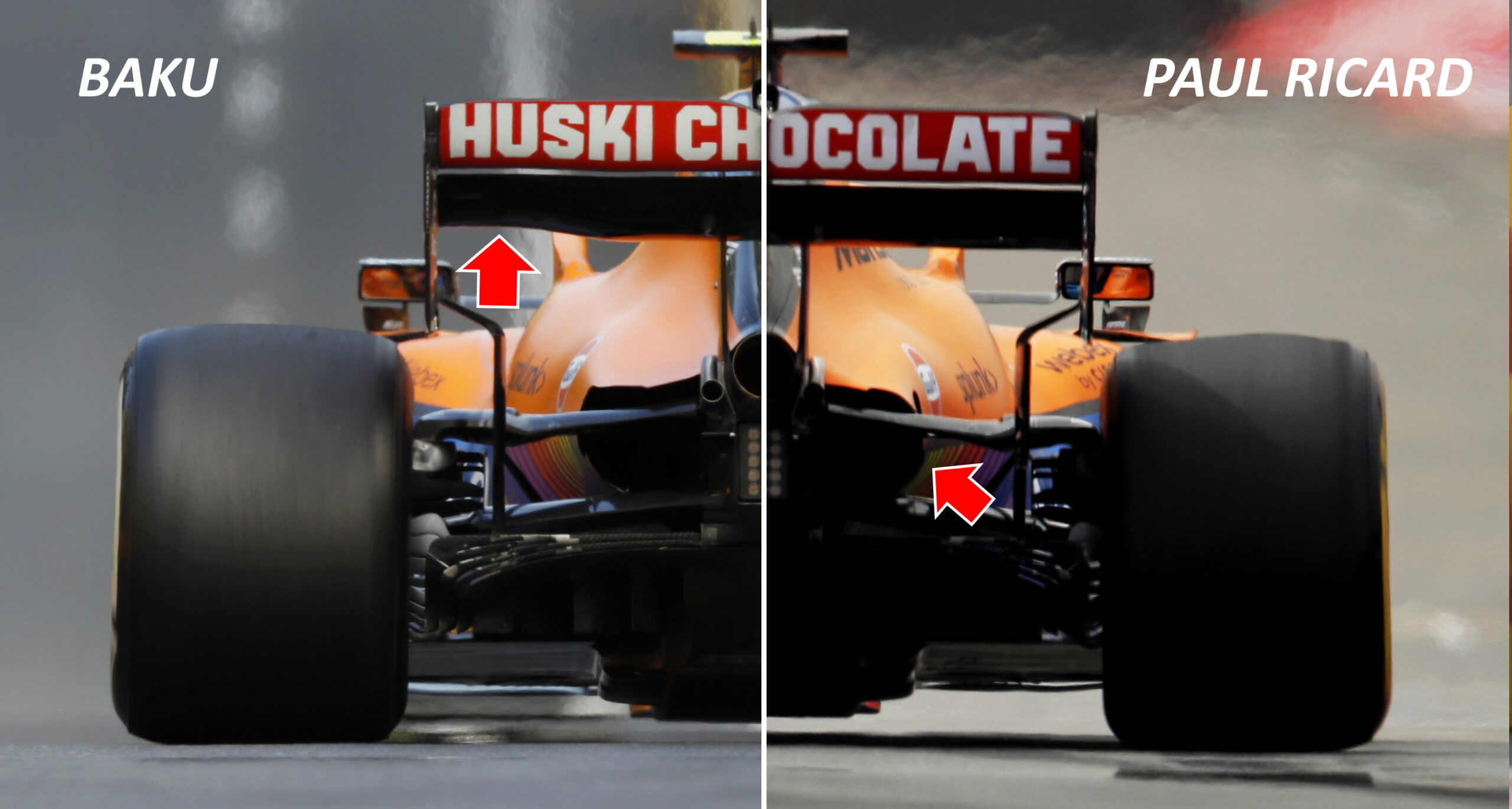 As for the new rear wing flex tests introduced at this Grand Prix, Ferrari and Mclaren seem to be unaffected by the new guidelines: Woking’s car is one of those that doesn’t use the wing much. The aileron is placed on the mobile flap and on the main aircraft, allowing the FIA ​​to have the aileron movement, as the stickers introduced in Baku are always available, although the FIA ​​continues to monitor movements in the ailerons. reference.

The new package introduced by Mclaren this weekend also changes the front area of ​​the car where they are trying to find better airflow management. The Mclaren is one of the few cars that doesn’t use the S-Duct system, which moves some of the flow up from the bottom of the chassis.

Two Mercedes-style fins have been added just up front of the chassis, helping the flow to hold onto the rest of the car thanks to a downward flowing effect. 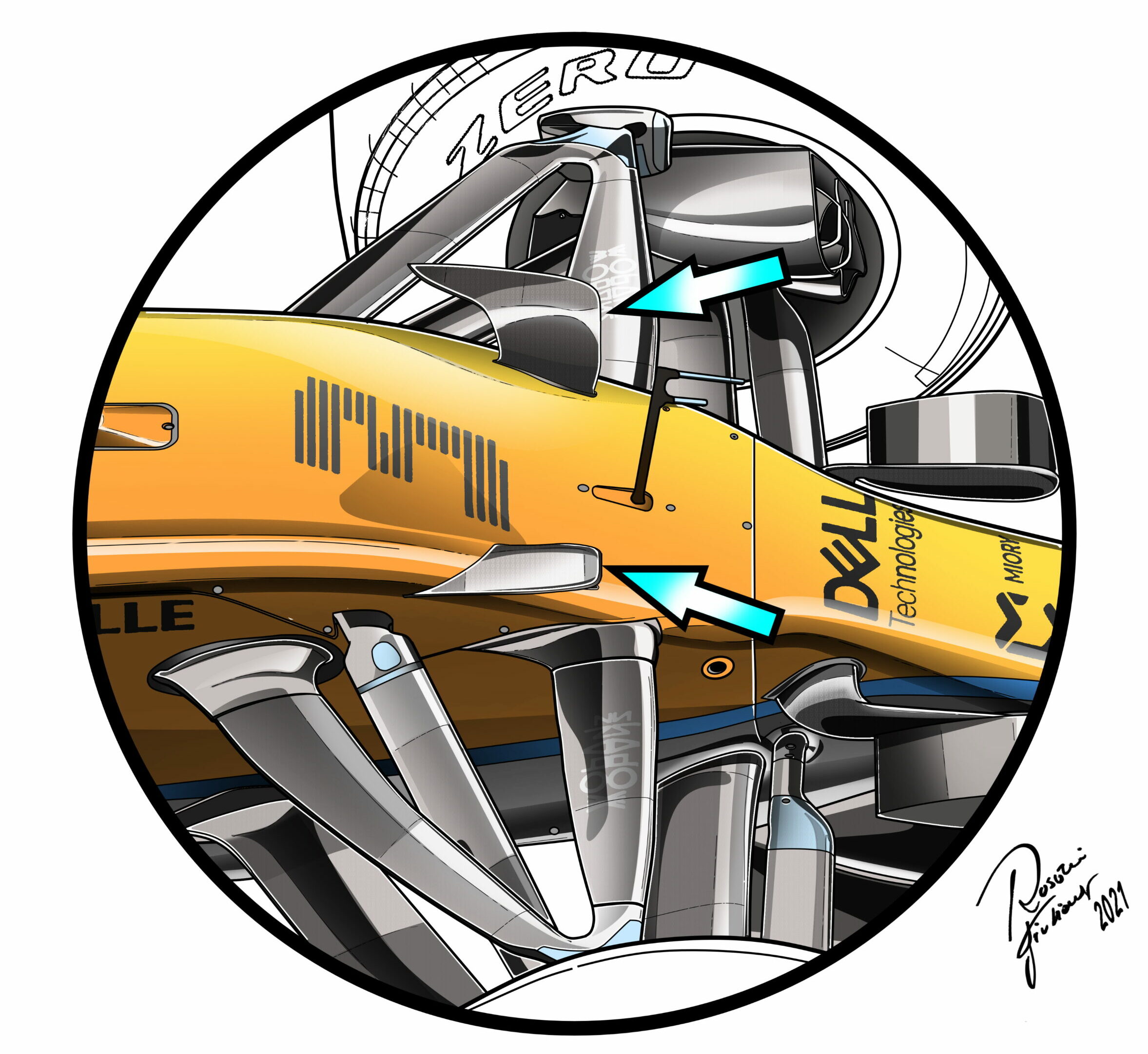 Changes to the front of the MCL35M have already begun in Spain, and the rear of Norris and Ricciardo’s car also behaves quite well in fast corners thanks to its long wheelbase.

Technical innovations were also seen at Ferrari, but not as significant as those at Mclaren. The main update on the SF21 was on the front wing, where drivers provided positive feedback and were approved for qualifying and racing. 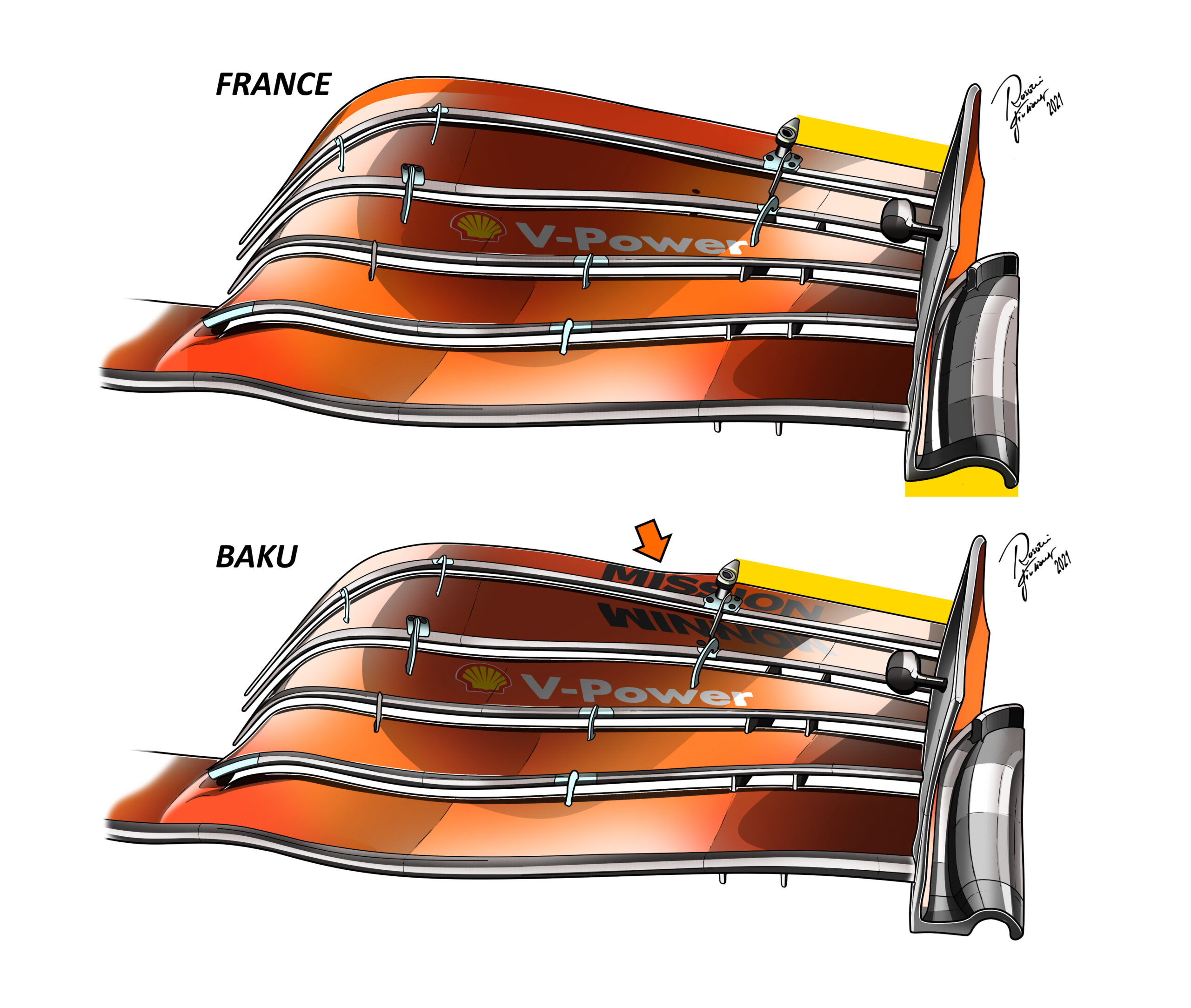 The new front wing has been revised at the ports where the arch has a wider shape, confirming the teams’ trend to bring more airflow to the underside. The incidence regulating flaps in the new specification have a wider shape when the adjuster is moved to the end plate.

Ferrari tried to take advantage of being on a fast track and being a fast single-seater on the mistral straight. In this regard, the “spoon” rear wing, seen on Friday in Imola and Baku, was tested and approved on Saturday.

While this selection was a good choice in qualifying, finer tuning in the race put more stress on the tires and negatively affected them. Ferrari were among the single-seaters most affected by the thermal degradation, knocking out the two reds from the top 10.

Ferrari also appears to have a slight power gap (around 15 horsepower) compared to Honda and Mercedes, leading engineers to prefer solutions with less friction on the tracks.

To further reduce turbulence and provide a cleaner flow, Ferrari combined the rear wing mainplane “spoil” (wing shape) with a cut endplate in the lower area. 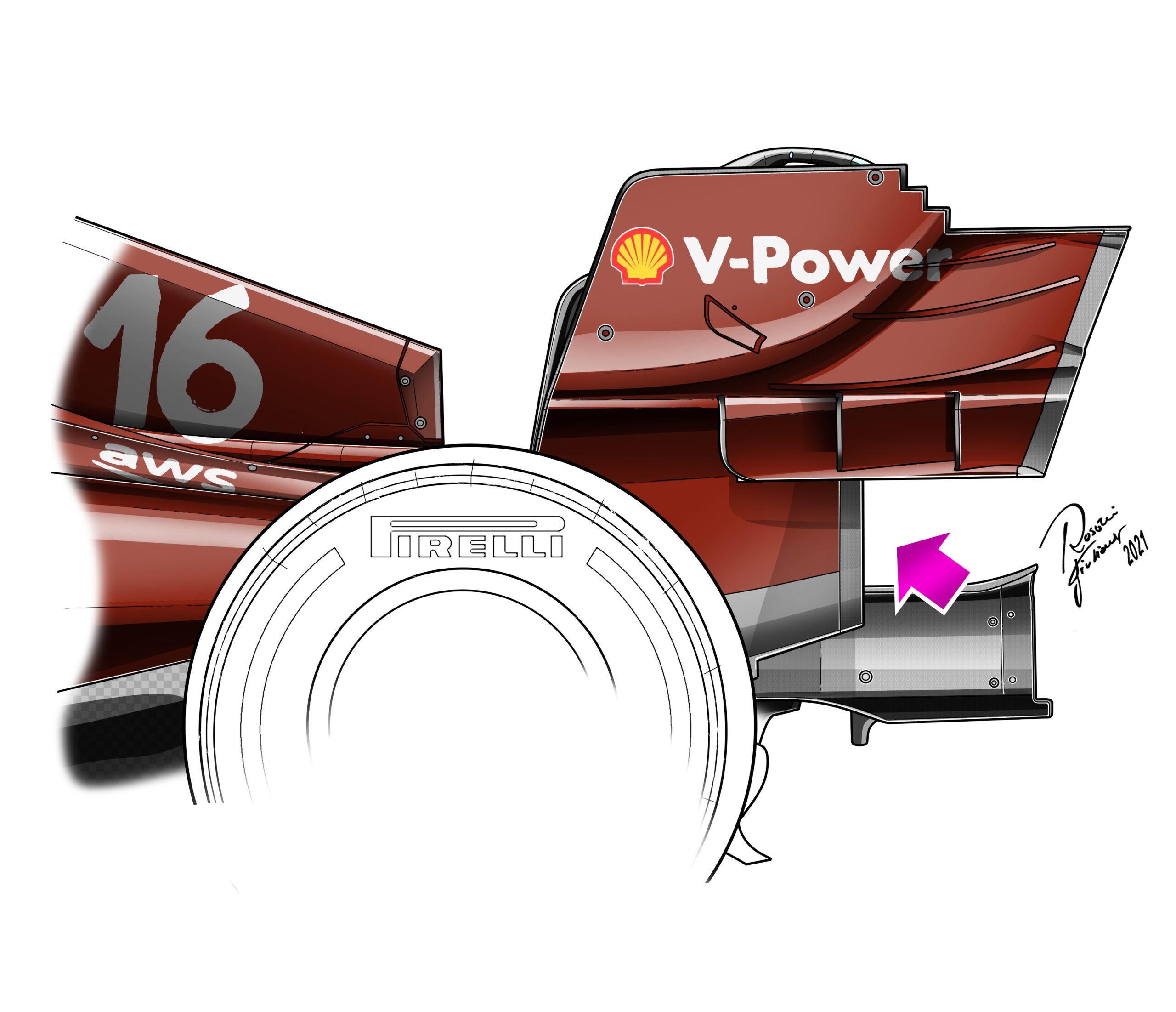 The technical difficulty at Paul Ricard was also related to the problem of “tyre pressure” after the accidents of Stroll and Verstappen in Baku. Temperature changes and pressure checks by FIA and Pirelli employees are now aimed at preventing cheating by teams who have “reduced” pressures. Gaskets were added to the valves, checks were made on cold and hot tires.

McLaren is third on the board

The Ferrari-Mclaren duel will continue this weekend in the double race in Austria, on a track that could, in theory, see a more relaxed Ferrari. Indeed, Spielberg’s trail does not present specific curves in support, except for the second sector.

But Mclaren still has a very efficient and fast car on the straights, so it will be hard to see who will have the more advantage between the two teams in the Red Bull Ring setup.

Moreover, major evolutionary strides are expected, not with new tracks, but only with adaptations to the track. Many teams are focusing on 2022, and nearly the entire technical department is now dedicating their resources to next year’s single-seaters.