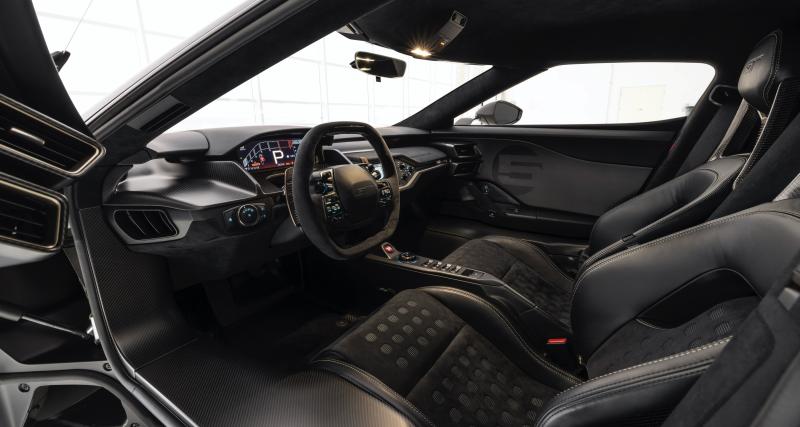 Zapping Autonews Maserati Grecale Folgore (2023): 100% electric version of the SUV in the video

At the beginning of March 2022, Ford posted on social networks some images showing a new special series of its supercar Ford GT. The latter, called the Holman Moody Heritage Edition, was finally officially unveiled by the blue oval brand on Friday, April 8, 2022. And as expected, it pays homage to the Ford GT40 Mk II by American Holman Moody, who finished third in the 1966 edition of the 24 Hours of Le Mans.

This limited edition is the final Heritage Edition Ford will offer to GT buyers. It has a gold finish with red accents, which is reminiscent of the GT40 Mk II to which it inevitably refers. The number 5 is engraved in white Oxford White on the doors, hood and rear spoiler. Some elements, such as the 20-inch wheels, door sills, front wing, mirror shells, grilles that house the engine, and even the rear diffuser, are made entirely of exposed carbon fiber.

According to Ford’s gauges, the interior of this Ford GT Holman Moody Heritage Edition also features carbon fiber. We find the material especially in the center console and in the shell of the seats. The black seat is in Alcantara with gold topstitching. The headrests are embossed with the GT logo. On the dashboard, future owners will also be able to find leather and Alcantara. This Alcantara is finally applied to the steering wheel, whose wings match the gold color of the body.

The engine of the Ford GT seems untouched by the engineers of the American manufacturer on the occasion of the launch of this special series. This twin-turbo 3.5 EcoBoost V6 therefore still develops 656 hp for 745 Nm of torque, allowing the Ford GT to reach a top speed of 347 km/h and accelerate from 0 to 100 km/h in 3.4 seconds.

Memory is important at Ford. The American manufacturer remembers one of the GT40 Mk II, which took the podium at the 1966 24 Hours of Le Mans. The race car, prepared by the American Holman Moody, made a mark on the souls, especially with its color. That is why red and gold colors are used in this version of the modern Ford GT. Its interior gets inserts from Alcantara, carbon fiber and even leather.